So it’s time to plant my second early potatoes in the victory garden and the variety I’m growing is called British Queen.

The British Queen potato was bred by Archibald Findlay in 1894. Findlay was a potato breeder from Scotland who soon moved to the potato capital – Lincolnshire. Many of his varieties Findlay bred we promoted between 1891 – 1921. His most famous varieties are – Majestic, Up-to-Date and British Queen. If you’re in Scotland, you probably refer to these simply as ‘Queens’.

I’ve looked online and seen that British Queen is the mashing potato of choice as they boast light, fluffy flesh. Although Findlay pioneered the blight resistant spud – British Queen is susceptible to blight, but luckily matures quite early. This means that if there is blight in the air, it should avoid any diseases that are in the air.

As much as I love the prices you get in your local B&Q or Homebase, I did find myself with a lack of choice – so I ended up purchasing these seed potatoes from RHS Wisely. They have a number of different varieties available, each with their own attributes. 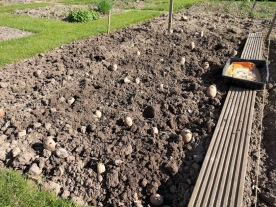 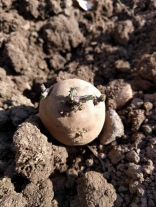 I was on the look out for an old, well known variety of potato to plant into my Victory Garden and no sooner than I had planted them, they started poking through the ground. If you take a look at my Victory Garden plan, you’ll see that I haven’t given these spuds a lot of room – this is because I’m trying to aim for a high yield – ultimately, I’ll just have to wait and see how these turn out.

These seed potatoes were planted about a trowels depth into the ground – and I’ll probably end up mounding these spuds up with material from the compost bin – we’re not quite out of the woods yet frost wise!

Digging out the answers so you don’t have to!

Ask me a question :)

Please state if you would like to remain anonymous.

Hello my name's Adam and I'm a 20-something gardener, blogger and proud allotment holder here in London, UK. I love growing my own vegetables and experimenting in the the kitchen. My ideal Saturday or Sunday includes working up a sweat at my allotment in the morning, followed by a cup of tea admiring the views. I've had an allotment for around 10 years now and I show no signs of stopping.