Time for a change…

When you’re gardening or at the allotment – do you ever get the feeling that you feel like you need a change? Well a few weeks ago I the itch to change the layout and try and get even more from the allotment. I asked myself what can I do to get the most out […]

When you’re gardening or at the allotment – do you ever get the feeling that you feel like you need a change? Well a few weeks ago I the itch to change the layout and try and get even more from the allotment. I asked myself what can I do to get the most out of plot, try and reach that goal of eating more seasonally and try and be more efficient with the time I have when I’m at the allotment.

There were also some things that were starting to bother me, for example some of the grass paths aren’t aligned up, so mowing the paths can be a little awkward. The entrance to plot also isn’t quite aligned, so the hose pipe drags across the plot when you water, sometimes causing a bit of damage if you’re not careful. These aren’t necessarily problems but opportunities for change – and why not! That’s what having an allotment is all about right?

It was a lot of humming and harring on my part as to what to do and how to lay out the plot. At first I thought I could get away with building raised beds all the way the down toward the end of the plot, but that soon changed because I realised that I was becoming too much of a perfectionist – something you can’t afford to be if you have an allotment.

I have to admit, I was quite impressed with my first attempt at building a raised bed, but after a while it started to move and I found it wasn’t as rectangular as I thought – this was soon dismantled and I’ll probably end up using the wood for something else.

I was also looking at my Victory Garden and I could see how great that was doing, thanks partly to the double digging and the way I had carried out some companion planting.  It was just so simple and I thought to myself, this doesn’t need to be hard work – keep things simple, easier and most important of all, keep them enjoyable.

Going with the mantle that things should be kept simple and easy, the plan boiled down one simple change – and that’s to remove some of the grass paths – which when written down on paper is a little bit of an underwhelming change.

So the two big beds at the front of the plot will be used for potatoes, meaning that I can spread them out a little bit more and hopefully that will improve yields.

My first early (or new) potatoes were a little bit of a disappointment this year due to a low yield. I’m still unsure if the low yield was down to the lack of rainfall or the soil conditions – something I’m still looking into at the writing of this post.  Anyway, after speaking to a few others on the site, I found that they don’t necessarily bother with growing first early potatoes and they focus mostly on the seconds and mains.

I know one of the key things that I would like to do on the left hand side is to introduce more permanent crops to the plot. These being blueberries, raspberries, increase the number of strawberry plants I have and perhaps start growing gooseberries. I was even thinking about growing a cherry tree as I absolutely love fresh cherries.

The right side can be used for ordinary vegetables including runner beans, cabbages, carrots, beetroot, French beans, peas, sprouts…etc. In the spirit of eating more seasonally, the crop change over will be a lot more prolific on the right than the left hand side.

So at the beginning of the year I double dug my Victory Garden and I can’t tell what fantastic impact this has had on my plants. The healthy, resistant and luscious foliage really is proof that this old technique is still one of the greats, and still one of the best things you can do to improve the overall health of ones garden.

I intend to double dig all of the new beds once they’ll built and this will give me piece of mind that the ground is as good as it can be for at least a couple of years.  If you want to learn more about double digging and the benefits – click here.

The old against the new

So as you can see, the change isn’t that much different – but noticeable. 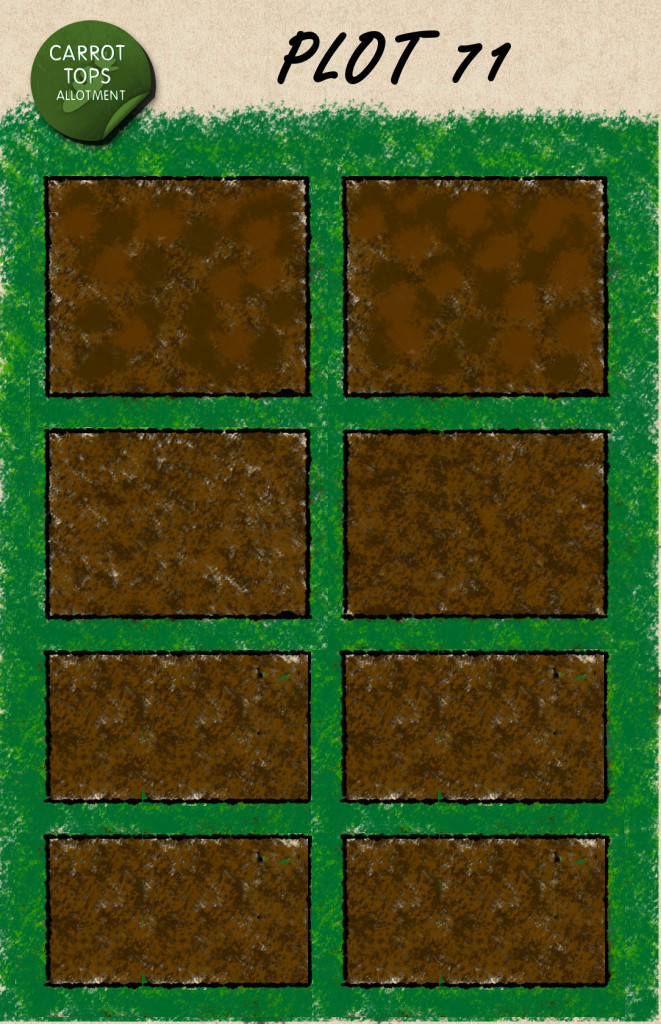