So I haven’t blogged for a while and I was thinking of a way to post an update you on what’s been happening at the allotment over the last month or two in an interesting way.

With that in mind I decided to write an update with a Sergio Leone theme whereby I can highlight The Good, The Bad and The Ugly over the last month or so.

This year I planted Charlotte Potatoes first and Desiree potatoes and judging from the tops they’ve gone from strength to strength and have really flourished with the weather changes.

If you’re starting an allotment I would fully recommend growing potatoes, they can be very low maintenance and rewarding at the same time.

I also think the flowers you get on your crop can often be overlooked and are overrated. I’ve started to harvest the garlic that I planted last year. I decided to grow lots of them because garlic is something that we use a lot of in the kitchen and so far I’ve been greeted with wonderful bulbs of white and purple cloves.

The patch is a bit overgrown with weeds and the dreaded horsetail so I’m getting rid of this as well. My red winter onions have been a pleasure to dig up. They’re lovely and round and I’m going to enjoy cooking with them in the kitchen. They haven’t needed much maintenance over the last few weeks except for a weed and a hoe hear and there.

I was a bit stingy with how many I planted last year and so I will aim to plant more next year. 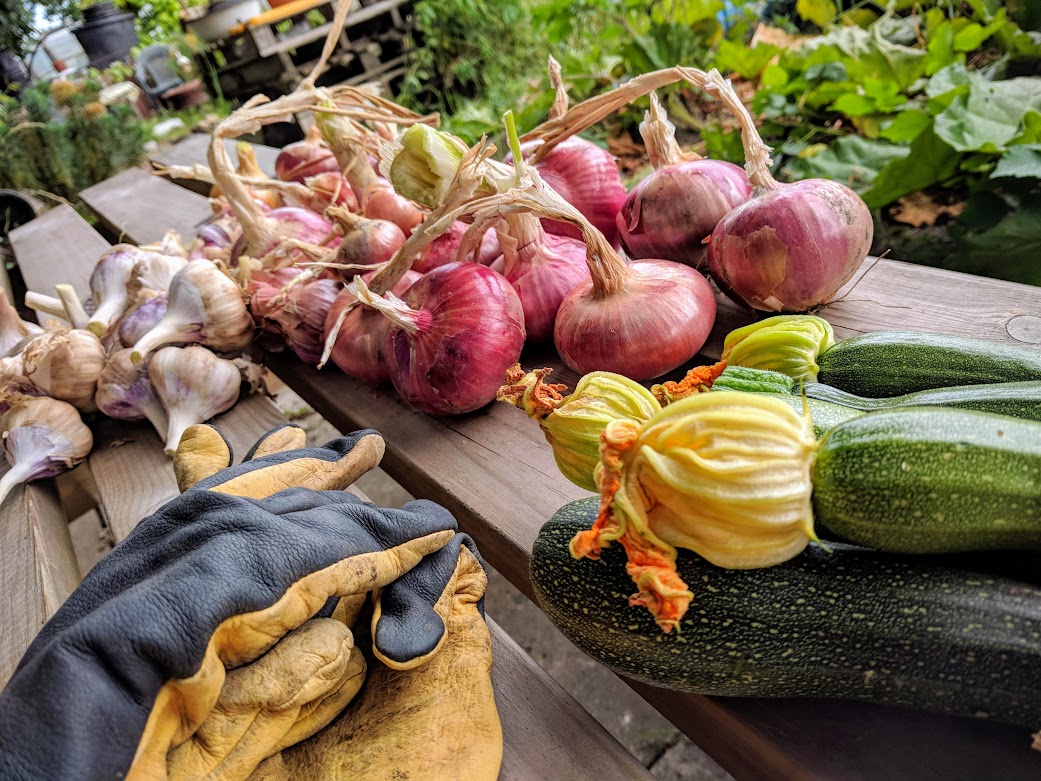 Wow! Simple wow. My courgettes have taken on a life of their own and are showing lovely wide, leaves, being a source of ground cover at the same time.

As is always the case with courgettes – I’ve left a few on there for too long and so I’ve ended up with few marrows. I’ll need to think of new and interesting ways to try and use them up.

Best start collecting those jars for some chutney…

The wild blackberries growing at the allotment are always a reliable delight. If ever things get a little bit slack here or there, I can always count on them to come up trumps.

That said they do have a tendency to grow bigger and take over quicker than you think. So pruning and chopping little and often can really help keep them in check.

Not only that, but regularly pruning encourages the plant to put it’s energy into the fruit. I had these curved poles hanging around in the shed for a long period of time and I decided to something with them and I ended up creating this rather elegant structure for my peas to grow up against – and if I say so myself, it doesn’t look half bad.

I’ve been periodically watering the plants and now I’ve generated a respectful number of pods.

I love fresh peas so next year I’m going to try and grow more of them.

I think that’s the trick with peas, grow lots of them so that they feel worth while to grow.

We did have a good glut of strawberries which was a lovely surprise baring in mind that I haven’t tended them to at all over the last 12 months. I’m growing Elsenta strawberries and they’re the most common type of strawberry that you’ll find in the your local garden centre.

Next year I’m going to expand the strawberry patch and grow some more. I’m yet to make strawberry jam, so that’s my goal for next year 🙂 I was excited to grow lots of different types of tomato plants, because I haven’t properly focused my efforts into growing tomatoes for a good couple of years. I said at the beginning of the year that this has to change – which it did for a while.

We’ve had two mini heatwaves here in the UK and my seedlings were completely wiped out by the heat during the first one. I was so discouraged that anything that did come up I just left to the slugs.

Lesson learned. From now on, I’m starting tomato plants in my flat where I can keep a close eye on them. I did say to myself that I should resow, but in the end I never got round to it. Same thing with the runner beans. They got wiped out by the heat and then decimated by the slugs.

What’s more – I built a pretty nifty structure for them as well, which is sadly going to waste.

Sadly, the calibrese were the third victim of the heat and slugs. Which is a shame because they came on so quickly and so were so healthy looking at one point.  Again I thought about resowing them – but seriously ran of out of time, so I’m left with no calibrese.

I have learnt something from the above however, and that’s to sow the plants I want to see succeed at home, because by doing this I can keep an eye on the seedlings and watch them grow. Now, I’m not sure if this would sit in the bad category or the the ugly category as technically – they did germinate, but they didn’t grow as well as I’d hoped – not like the red onions.

The reason being is because I sowed them next to a place where I had some mint, lemon balm and some chives, which I think was too much competition for the onion sets, hence why they didn’t swell as well as I’d hoped.

Another lesson learned for next time!

Something that has done incredibly well (annoyingly) is the bindweed. A truly prolific weed which seems to take over at an unprecedented rate.  It’s long wiry leaders spread far and wide and seem to last longer than you would ever expect to last.

If you have bind weed – avoid putting it on your compost bin – you’ll regret it later on as it will, without doubt still survive and spring up wherever you spread your compost bin.

My advice with dealing with bindweed is to leave it out in a wheelbarrow to dry and then once it’s dry, burn it.

Seems quite apt to end a Sergio Leone – allotment-update-ish type of post with a horse related reference… Can you see what I did there? Anyway, Horsetail (often called Marestail) is another prolific weed that takes over and will outlive us all.

Horsetail is a prehistoric plant that really takes some hard graft to get rid of. I’ve written a post here on how to to deal horsetail.

So there we have it! That’s what’s happening!

4 replies on “The Good, The Bad and The Ugly”

Enjoyed reading your post and seeing your food garden. Never heard of horsetail weed before – thanks for including the link. First time I’ve seen it. But bindweed, here in Australia, is known as Convolvulus and we actually grow it as a ground cover. It looks great growing down embankments and in garden borders. Courgettes we call zucchini and they are a popular vegetable.

Glad you enjoyed and thank you for commenting 🙂 . Horsetail is very prolific over here and it is spread by the railway lines (at least toward the outskirts of London). It’s interesting that bindweed is grown on purpose and for ground cover… Do you have any tips on how to get rid of it?

Focus on the good, learn from the bad and deal with the ugly! 😀 My tomatoes are doing well, but all of my brassicas have died. Cabbages, Brussels sprouts, swede, all gone. Broccoli gave up on itself, too. And weeds are annoyingly active, just like yours. Good luck though, don’t let it get you down 🙂

Aw thank you for the kind words! It’s comforting to know I’m not the only one 🙂 I am indeed focusing on the good. I’m thinking of news to not wind up in the position I’m in now. This hot weather and lack of rain has sure taken a toll!