Building a bird station for the wildlife garden

Building a bird station for the garden is a great exercise and is a wonderful feature for any green space. 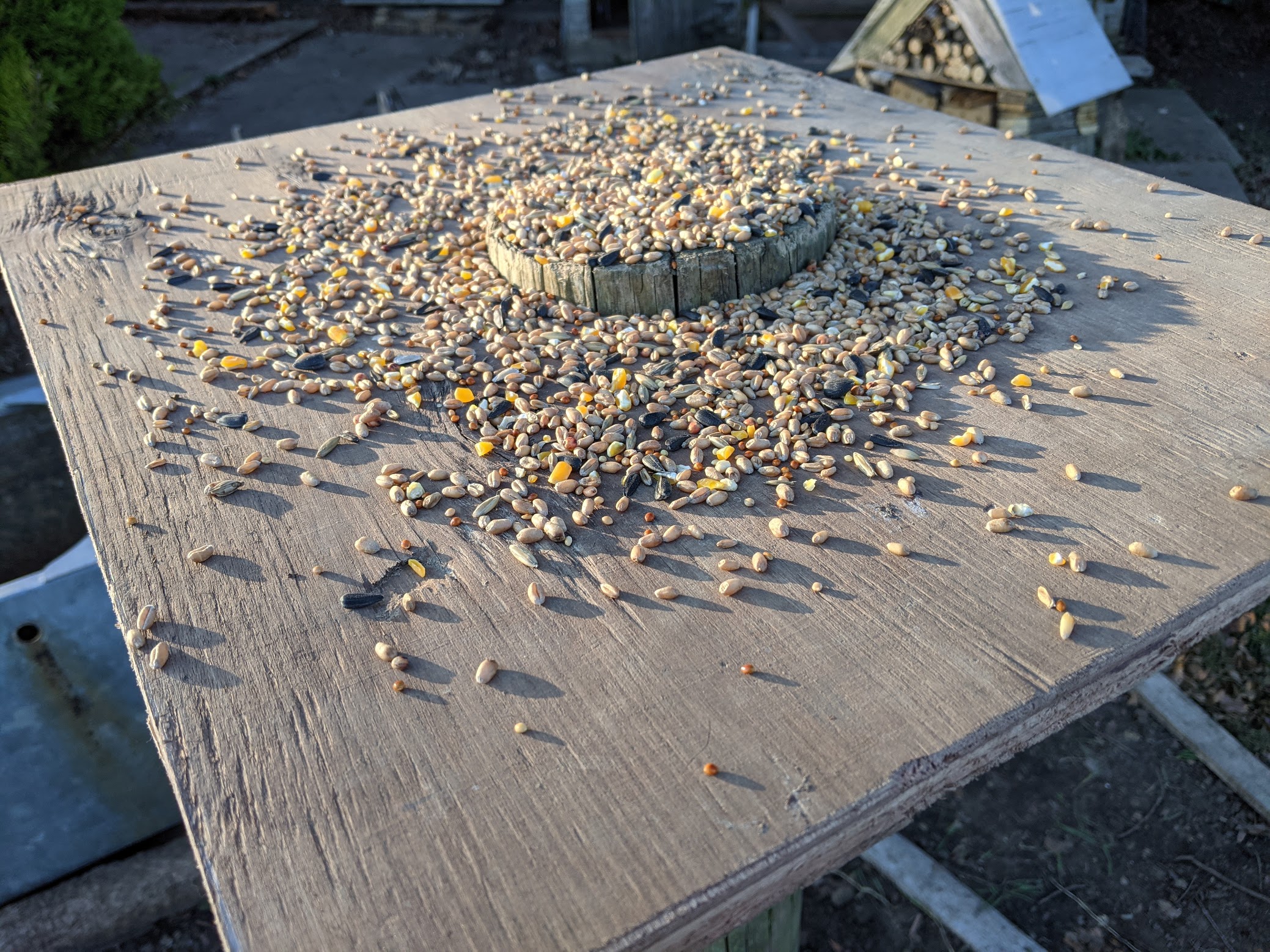 First came a bug hotel, then a hedgehog hotel, now a bird station to complete the wildlife trilogy

As I’ve been building the wildlife garden, and dismantling the bramble area, I’ve accumulated a fair few decorative logs to use for one thing or another, some have rotted out at the bottom – others still have some life in them – And that’s when I thought they could be the solid basis for a bird station.

When the pandemic started last year, there was less traffic, less movement, less pollution, and this made the birds a lot more noticeable.

The reason why we’re noticing them more, probably is because there’s less background noise. This is known as the Lombard effect – i.e. when it’s louder (like at parties), we talk louder and vice versa.

There’s a bit more on this here.

As a result we started putting bird food out, and we would watch the birds come and go. This proved to be quite therapeutic and so it was logged in the back of my mind to build something to help the birds, and encourage birds to the plot.

Birds are a good sign that a garden is healthy, they’re very good for pest control as they’ll generally go for slugs, aphids and mosquitos but to name but a few. They’re also very good for pollination.

I didn’t have a lot, but just enough to put something together. Something unique and allotmentesque – or allotment chic if you will.

The tools were really minimal, and admittedly my DIY skills could be a lot better – but I did my best, and that’s what matters.

The first thing I did was mark out the square for the main top platform, and also the circle of where the post would sit on. I made the square bigger than what I needed at this stage, mainly because I knew I’d have to shave off a bit more here and there.

Cutting a board of this size by hand is quite tricky, and if you have a power tool – use it, it’ll save you tonnes of time and you’ll probably get better results.

Once I cut the board, I then marked out squarer markings to try and square everything up a bit more. Plywood tends to splinter a little bit, so a bit, so a bit of sanding here and there after helps to smooth the edges.

The next thing I did was dig the hole for the main post, and I dug the hole about 2ft deep.

The pole was about 7ft foot (give or take), so the the two foot depth would keep this pretty sturdy against the elements. I used the spirit level on the two sides to keep everything upright.

Ideally it would need to be kept upright so that food and things doesn’t slide off.

Then came a slight oversight, even thought the board was square-ish and the poll was straight, the top of the post was wonky… Less than ideal.

So I cam up with the genius idea of making the hole, through what I’d already marked out.

Like cutting the board in the first place, trying to make this hole by hand is a lot hard than it looks, so again, if you have a power tool, then use it.

I started off by drilling lots of holes into the board, until I was at the point where I could punch the hole through. The hole was a very snug fit, I needed to shave some of the inside of the hole with a hand saw to get it to fit in places.

I tapped it down and made sure everything was was level with the spirit level.

A water source is something that’s a must have for any bird station. Not only do they use it for drinking but also for preening.

I’ve used an old saucepan lid as the bird bath part of the station. It’s perfect because it’s not too deep, it’s nice and shiny and therefore visible and the handle part of the lid can be used to dangle an extra feeder.

The great thing about this is that the base of the saucepan lid can be used to dangle a feeder or an extra treat.

The last thing was to create a perch for the birds to stand on and move to and fro from when getting some water and food.

Fortuitously, a couple of years ago, I broke a spade doing some digging (probably trying to dig out some rhubarb), and the handle stayed in the shed, until such a time as I could use it again for something. The broken edges were sawed off and I sanded the corners so that there’s no hard edges to the perch.

I drilled a pilot hole into the handle at an angle and then I drilled the rest of the screw into the post to hold it steady.

A bird station wouldn’t be complete without some food, so I covered the top with bird feed, which really does set it all off nicely.

I haven’t used any particular bird seed of note, just the regular fare that you would find in a local garden centre or pound shop. I’m sure at some point, I will most likely learn how to make my own bird feeders to use with this new bird station.

What birds do you see on the plot or in the garden? Is there anything you do in particular to attract different species? I’d love to know in the comments below.