British Queen potatoes were the variety of second early potatoes I chose to grow in my Victory Garden. Around two weeks ago I took my fork and decided to harvest them from the ground. Sadly, I have to admit, I was a little bit disappointed. Like everything you grow at the allotment, you’re always hoping for […]

British Queen potatoes were the variety of second early potatoes I chose to grow in my Victory Garden. Around two weeks ago I took my fork and decided to harvest them from the ground. Sadly, I have to admit, I was a little bit disappointed. Like everything you grow at the allotment, you’re always hoping for the best and hoping that you get a good return on the hard work and effort that you put in.

Sadly, most of the potatoes (just over a quarter) were really small, almost marble like – which isn’t ideal when the number of potatoes you dig up isn’t very many as well. Overall – a poor yield.

The variety of potato I harvested was British Queen, which is a variety that’s over a 100 years old and described as…

So, with the above in mind – you can imagine my disappointment, however – I’m sure this is something that all growers have had to deal with at one time or another and this result has of course prompted me to take a step back and look at where I went wrong.

I’d not long since harvested my Red Duke of York first earlies and faced a similar fate with those spuds as well. So what have I discovered?

Spacing
I’ve grown the potatoes in my Victory Garden this year, which means I’ve crammed the tubers into a small space.  This means that the plants were most likely competing for space and water, which really isn’t ideal.

Watering
It’s been a particularly dry year at the allotment, and across the country (at one point I thought we were going to have the pleasure of a hosepipe ban!). Can I honestly say that I watered as frequently as I should have? The answer is probably not – a lack of water means the tubers are likely to struggle to swell.

Feeding
In one of the two beds of my Victory Garden I double dug in some compost material, in the bed that I didn’t, I grew my potatoes – I’ve always been warned that too much fertilisation can be a bad thing. Too much nitrogen can encourage too much vegetative growth. However, clearly, too little nitrogen can cause a low growth rate in your tubers.

Early frost damage
My potatoes were victim to early frost damage, which although didn’t decimate the plants, they did stump growth for a couple weeks. Next time, I’ll be sure to mound up sooner rather than later in order to keep everything to an optimum temperature.

I’m yet to harvest my Desiree main crop potatoes – it’ll be interesting to see how these turn out. If these are small like the British Queen potatoes, then I would say my estimations are correct. 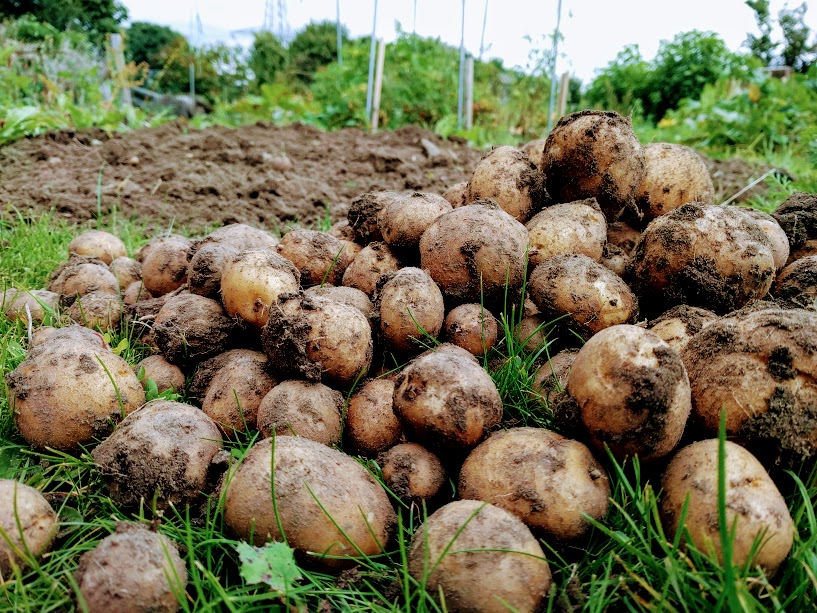